The Barix Instreamer is an intelligent hardware encoder that converts analog and digital audio into MP3 which then can be transmitted to a streaming server. Ideal for live broadcasters, this device eliminates the need to dedicate a computer solely to streaming. The Instreamer can go from box to streaming in 10 minutes and is configurable through a local or remote web interface.

Connection to audio equipment is made simple by offering stereo RCA analog as well as S/PDIF and coax digital inputs. The Instreamer can communicate with and control other audio devices through its serial and IR ports.

The fidelity of the audio signal at similar bit and sample rate is superior to what can be found with free or low-cost software based mp3 encoders.

Up to eight Shoutcast or Icecast streaming servers can be sent an audio signal at once. This device works on both a static and dynamic internet connection.

The Barix Exstreamer is a reliable, IP-enabled audio decoding/encoding device which can be used in applications such as local and internet-based IP music distribution systems, in-store audio applications, paging systems, etc. The Exstreamer 500 is the primary device for use with our Barix Reflector Service.

StreamGuys is an authorized reseller of the Barix Instreamer. Call 1-877-287-2938 x769 , or email sales@streamguys.com for pricing information. 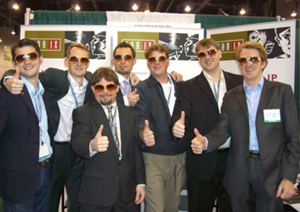 Barix and StreamGuys at NAB2007